When my husband and I were first planning our trip to Europe, it took a while to convince me that we should add Rome to our itinerary. To me, Rome didn’t seem to hold the romance of Paris, or the charm of London. David was set on spending a few days in Rome though, so we added Italy to our trip. And it took me completely by surprise—its cobbled stone streets, narrow alleyways, crumbling stone ruins, overhanging flowers, and candlelit cafes tumbling off each street corner held a charm that was unmatched. It was in Rome that I had the moment I went to Europe looking for: the magical feeling of being in a different time and place. I was standing in front of the Trevi Fountain, watching the sun set behind it, and I just wanted to freeze time and live in that magical moment a little bit longer. Italy was also where we ran out of money, which was by far our least enchanting European moment, but our greatest adventure in learning to live off gelato and breakfast buffets. Italy stood out as the crown jewel of our trip, with several not-to-be-missed adventures to put on your BucketList. 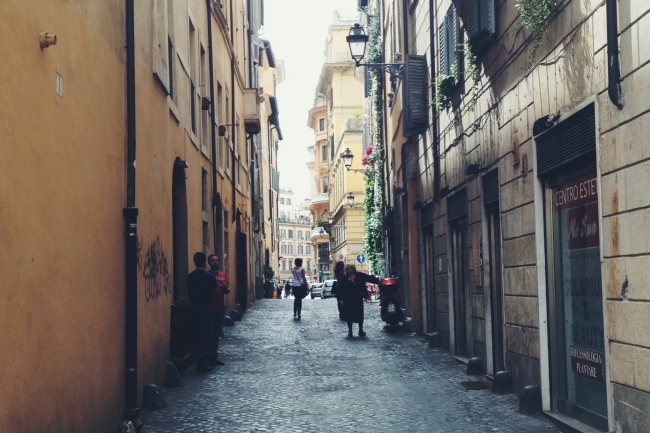 Go to the Tazza D’Oro coffee shop. Steps away from the Pantheon, and founded in 1946, its home to one of the best and least expensive cappuccino in Rome. This is where the locals go for an afternoon espresso. It closes early in the day though, so make sure to not wait too late!

People watch from the Spanish Steps. The Spanish Steps begin with the ‘Fountain of the Old Boat’, or Fontana della Barcaccia, and fan upwards, twisting and turning into a picturesque spot that brings painters, poets, photographers, and people watchers alike. Sit here at twilight and watch the city come alive with lights.

See a street performance at the Piazza Navona. The jewel colored Pizza Navona had some of the most beautiful fountains that we saw in Italy. It also was full of street performers—while we were there, we saw a group perform that had come to Europe with no money, and was traveling around different countries living solely off the earnings they took in from their performances.

Experience Giolitti. You’re going to see a lot of gelato sold in Rome, and you might even be tempted to think that its all created equal. We’re here to tell you that it’s not. Giolitti is worth the huge lines snaking out of the door, and more expensive prices – it is by and far the most delicious gelato we have tasted. No trip to Rome would be complete without a DAILY stop.

Throw a coin in the Trevi Fountain. Like I said earlier, there really is something magical about it, it’s not an overrated tourist experience. Plus, legend has it that anyone who throws a coin into the Trevi Fountain is guaranteed to return to Rome.

There’s a bread and water fee at most restaurants in Rome. Usually these aren’t things that Americans are used to being charged for, and can take your total up quite a bit if you aren’t prepared for it in your budget.

Stay outside of the city! You will save a ton of money, and public transportation is cheap and easy to use. We stayed at Hotel GP, which included breakfast, a proper Italian cappuccino, and was walking distance from a tram that took us to the metro.